Heiress Diana Harris is an American social media personality and Instagram star who rose to fame as the youngest child born to rapper T.I. and singer as well as songwriter Tameka Harris. 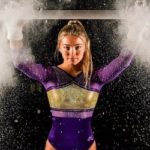