He is of Cuban descent.

He has also dyed his hair ‘Blonde’ in the past.

Luis Espina has endorsed brands such as – 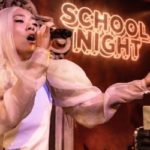